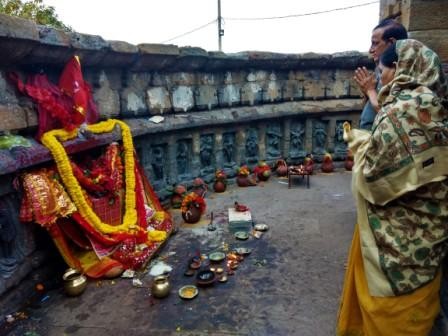 Ancient Kalinga has virtually remained in isolation from other parts of India & in this very isolation, it has preserved some of the most important & unique aspects of Odisha’s cultural heritage. It is for this reason that this state has so much to offer to curious tourists who seeks to unfold new mysteries. One such mysterious location is the Chausathi Yogini Temple at Hirapur, near Bhubaneswar. Drive of around 15 kms east from Bhubaneswar, through Puri Main Canal, amidst paddy fields, will take to the small quiet hamlet of Hirapur, which despite being near to a city, holds its rustic atmosphere intact. What makes this temple quite unique is that it’s the first 64 Yogini temple in India & from here it spread to other states. And, its the smallest temple among the list of four major surviving 64 Yogini temples in India (in fact in world), among which two are in Odisha,  at Ranipur-Jharial (9th cent), Bolangir. The rest two are at Khajuraho (9th cent) & Jabalpur (10th cent) in Madhya Pradesh.

This beautiful yet mystic site of ancient tantric practices was discovered in ruins, by eminent historian & archaeologist, Kedarnath Mohapatra, amidst heap in 1953. He literally pieced it all back together to the circular roofless structure that holds the 63 female divinities (56 in wall cavities & 7 on central wall) with one missing, said to be taken to a somewhere place called Yamankuda. This temple is built with coarse sandstone blocks with laterite in its foundation by Queen Hiradei of Bhauma dynasty during 8th-9th century, as per whom the village is named Hirapur (originally Hiradeipur). The temple belongs to a genre of architecture, which is completely different from the major Kalingan style & finds no mention in silpa-sastras as they were kept secret by the sectarian practitioners of the cult.  The architecture will leave the visitors spellbound since the temple doesn’t have a roof & looks like a circular yoni from above. Let’s know that tantric prayer rituals often involve worshiping the bhumandal (environment consisting all the 5 elements of nature – fire, water, earth, sky and air. creating global energy cycles of tatvic tides. It is stated that these deities use to roam about in a group in the air and when they descend, always settled in a circle, hence the open air circled temple. A circular wall, hardly 2 metres in height, containing 64 niches within its inner circumference encompass this hypaethral (roofless) yogini shrine.  If one takes an aerial view, the temple will look like a chakra with 64 spokes.

The temple’s outer walls holds nine Katyayanis (Navadurgas) in niches, the entrance has two dwarapals, Kaal and Akaal on either side. At the base of the Katyayani statues, are either a severed head, a jackal or a dog (or all) – normally interpreted to be the animals found near dead bodies or carcasses, and almost all the Katyayanis hold different types of blades as if raised to dismember or behead, but with similar umbrellas. The entrance is of low height & one has to virtually lean to enter the shrine. As someone said “The narrow entrance to the peeth is like the passage of the yoni, constricted at the opening, but widening into an open circle (a womb) that embraces urdhvalinga Shiva at the centre”.

The idols have been carved from fine grained grey chlorite stone & many of the faces have been said to be destroyed by Kalapahad, the Afghan invader, but even now had failed to diminish the beauty in the eyes of the curious visitors. The Yoginis here are extraordinary standing figures, all delightfully poised with the soft smile that further enhances their beauty, while the fact that some of the  Yoginis have animal heads does not detract from their attractiveness.  Each yogini stands on pedestal or vahan of her own (an animal, a demon or a human head), each showing different expressions with a unique hairdo, weapon and the most delicate of accessories that suggest the shrine dates back to a little after 800 AD. None of the sculptures of Yoginis are erotic as in other temples related with tantrism. This is because this cult didn’t believe in sex as a path to self discovery. At the centre stands a Devi/Chandi Mandap (central altar in cuboid) of 30 ft in diameter with four depictions of Bhairav (Shiva). The presiding deity is Mahamaya, who stands on a human head & is worshipped as a form of Durga/Kali by the villages as their Gramdevi with vermilion, cloth & chrysanthemum flowers – all in symbolic red colour. The image of Shiva on the central pavilion is also said to be missing just after it was discovered in 1953.

The 64 yoginis have evolved from the Saptamatrukas (Sata Bhaunis in Odia) who are the personified powers (Shakti) of different Devas – Brahmani, Vaishnavi, Maheshwari, Indrani, Kaumari, Varahi & Chamunda. Additional member include Narsimhi, making it Astamatrukas. Among the tribal traditions associated with yoginis, one tradition focuses on the yoginis as acolytes (assistant) of the Great Goddess: the matrukas. This tradition describes the yoginis as being born of eight mothers and formed into eight groups (8×8=64). They have helped Goddess Durga in her war against Raktabija, a demon king who would multiply from each drop of his bloodshed on the ground. The demon was killed with the yoginis who drank the blood drops of the demon before they could touch the ground. After the fight, the 64 goddesses (Yoginis) asked Durga to commemorate them in the form of a temple structure. The individual images & details of Yoginis here shall be shared in my subsequent article soon.

However, one can view this beautiful video on 64 Yogini of Hirapur by Kalinga Diaries,  a Bhubaneswar based startup exploring the lesser known heritage sites of Odisha through guided tours, for a real feel of the shrine.
https://www.youtube.com/watch?v=5ET9Gdpydzg

Other temple or images inside the complex includes one small Shiva temple under the name Sankateswar, near the entrance gate. Beside it, an image of Gopinath has been displayed in open, which was recovered from a nearby paddy field. There’s one small kitchen on the left side corner of 64 yogini shrine with abhada (temple food) facility, but one needs to make a prior booking beforehand. There’s also a beautiful village pond in front of the temple complex, named as Mahamaya Puskarini. While discussing with the temple priest, it came to knowledge that there’s one temple with goddess by the name Budhi Mahamaya (mother of Mahamaya), on the Balianta canal road towards the Sudarshan daru location. The best time to visit Hirapur is during the early hours of the day when the surrounding atmosphere is calm & heavenly. Avoid during monsoon since it’s an open temple with a lawn around. Magha Saptami is an auspicious day to worship yoginis & witness the Vishwa Shanti Mahayagna. There’s more rush for darshan noticed during Dussehra festival. Every year, Chausathi Yogini Mahotsav is being organised between 23rd – 25th Dec with dance performances related to shaktism. This location is a must for blessings seekers & tourists alike, since its a gem of Prachi valley. Now, do you think these reasons are not enough to make a visit to this Chausathi Yogini complex at Hirapur 🙂 !

Photographs: Taranisen Pattnaik
Ref: https://ashishkumarnayakodisha.blogspot.in/2015/07/chausathi-jogini-temple-at-hirapur.html?m=1 ; A Note on the Hypaethral Temple of 64 Yoginis at Hirapur by Kedarnath Mohapatra