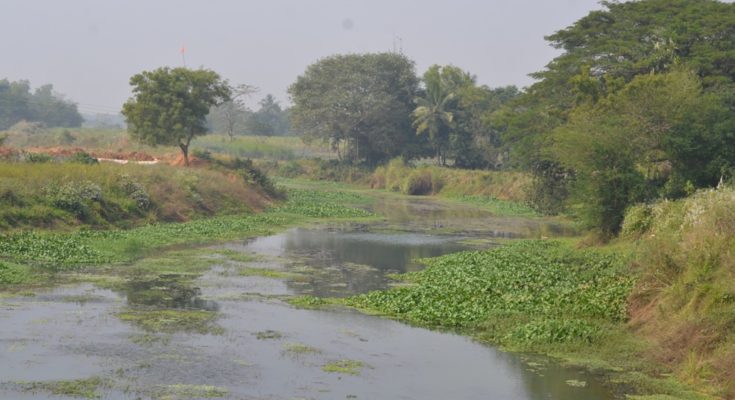 The Hathigumpha inscriptions at Udayagiri, BBSR, speaks about Prachi river. Prachi Mahatmya  uses these lines which literally means as “On the both bank sides of Prachi river, the palace of Samrat Kharabela  by the name Maha Bijaya Prasad is built”.. maybe at Junei village under Prachi valley where there is still a mound noticed)

Prachi Valley is considered as the Saraswati of the East. Saraswati has long back been extinct whereas Prachi is still flowing, although in limited condition. It flourished between 7th & 16th century AD during which most of the monuments were originally built. Such monuments included brick temples, stone temples, muths, stepped wells, tirthas, river banks/ghats, civilization, forts, military encampments, ports, anchorages, sand dunes, Islamic structures etc. Most of the monuments have been lost in time due to natural erosion, invasion, vandalism etc. The few hundreds that remain are a living testimony to the glorious civilization which once flourished in this small place. Some monuments & movable objects have changed location & identity, but the aesthetic remains intact. Two of the around 150 monuments are under ASI while 15 are under State Archaeology. Religion in Prachi valley was quite tolerant & accepted all religions, ideologies & sects with open arms, be it Hinduisim, Jainism, Shaivism, Shaktism, Baishnavism, Tantrism, Buddhism & even Islam.

Holi texts like Kapila Samhita speaks much about Prachi & its purity. Ptolemy, in the 1st Century C.E. has mentioned in his travelogue about Prachi river and the maritime activities that happened on its various small banks. Sarala Das’s 14th Century Odia Mahabharata too has extensive mentions of the Prachi river. During the British rule in Odisha, the river was a navigable one with trading activities like salt trading was on. Dynasties linked with the great Prachi valley includes Chedi dynasty (Kharabela), Shailodbhaba, Bhaumakaras, Somabamshis, Eastern Gangas, Gajapatis & Mughals. The Copper Plate grants recovered from Chaurasi, Kenduli & the inscription of Sri Baidyanatha at Sobhaneswara Temple (Niali) is quite important epigraphical records. The gem among all literary sources is Jayadeba’s Gita Gobinda, the outstanding 12th century classic that is still used by scholars as a prominent source for the study of the socio-religious and cultural significance of the Prachi Valley.

The importance of the Valley was first reported by Govinda Rath in 1906, after he discovered an Odia palm leaf manuscript of the Prachi Mahatmya in a Mutt near Konark. Narayan Tripathy, after studying the Prachi Mahatmya, published a series of articles on the archaeological remains of the place from the period 1928-32, published in various vernacular and English newspapers, besides the Bihar Orissa Historical Research Journal. It was only in 1935 that the first printed version of the Prachi Mahatmya in Odia was published by Akuli Chandra Mishra. In 1954, Nabin Kumar Sahu and Narayan Tripathy along with three other scholars undertook a preliminary survey of the River Valley. They visited many of the approachable sites of the Valley and realised its relevance and historical importance. Eminent historian Jadunath Sarkar wrote a paper on the Barahi temple of Chaurasi & made a desire to make a comprehensive study of the Prachi Valley. But it could not be culminated due to his ill health & his ultimate death in 1958. Gangadhar Bala’s book “Prachi Kular Shaiva Dharma” was the first book on a specific aspect, here on Shaivism in 1954. However the most important work on the Prachi valley, which popularized the importance and relevance of the place, was by a non-academician, Dr. Radha Charan Panda, a physician who was posted in Niali. His work Prachi Nadira Aithihasika Bibhaba, even though a small book, was the first work that was written in simple and lucid form. He was the first to emphasize on the Dwadasa Sambhus (12 shibas) and Dwadasa Madhabas (12 Bishnus) aspects of the Valley earlier mentioned in Prachi Mahatmya.

Shaktism too played a predominant role in the Prachi Valley. Goddess Durga,from two armed to twelve armed, is  the most impressive goddesses of the Hindu Pantheon, became the nucleus of Shaktism. worshipped both as a creator and protector and as a destroyer of evil. The important Shakta  manifestations are Durga as Mahisasuramardini, Chamunda, Sapta Matrikas, sow-goddess Barahi, serpentgoddesses Astika Jaratkaru, Parvati and Laskhmi. The Mangala temple at Kakatpur dating to the 9th Century C.E., has unique iconographical features. The different Chamunda images spread all over the Valley clearly suggest the prevalence of Tantrism during the 8th-9th century C.E. The Barahi image at Chaurasi village too is one of its types. Major ghats includes Tribeni ghat, where the confluence of the river Prachi, Manikarnika, a distributary of the Kushabhadra river and the invisible course of the legendary river Saraswati meets in the village Kantapada.

Prachi is known for its various muths & ashramas too. Madhabananda Jew Muth at Adaspur (Cuttack), Deuli  Muth, Antarbedi Muth at Tribeni Ghat (Kantapada in Cuttack), Ananta Abadhuta Muth at Konark (Puri) are some of the examples of the muths which are either still there or extinct in time. Many Islamic monuments from the 17th Century C.E. are found in the Valley. Historical mosques have survived the vagaries of time and can be seen at Niali, Madhaba, Banamalipur, Lataharana, Mukunda Prasadpur and Gasalpur. The Mukadam Jahania-Pitha, popularly known as Pir Jahania is a shrine revered by both Hindus and Muslims alike. As a seat of the Sufi tradition, this Pir shrine is an example of social and religious harmony in the Prachi Valley.

The Prachi valley was perhaps the richest repository of exquisite images of the Jain pantheon anywhere in the country. If a chronological classification is done, the Jain sculptures scattered all over the Valley will find the first place of prominence. Jainism got a strong foothold on this sacred River Valley during the reign of Emperor Kharabela, who had extended the Kalinga Empire from the Ganga to the Godabari. Towards the last part of his life, Kharabela became a staunch devotee of Jainism and spent his last days as an ascetic by excavating the caves for the monks in the Khandagiri and Udayagiri hills. Both stone & bronze images of Rishabnath, Mahavir & other tirthankars have been discovered in Prachi region. Unfortunately many of the finer ones have been stolen, but the few that are still to be found confirm that the valley was once a very popular Jain centre. Several images from Kakatpur area were shifted to various museums in Bhubaneswar, Patna, Kolkata & New Delhi. Some have changed identities & being worshipped in households under different names.  The iconographies of the Jain images of the Prachi Valley surpass all other places. The block of seven Tirthankaras in a row with the seven sasana devis below are unique and not found elsewhere.

The Prachi valley was an important Buddhist centre & the rich haul of Buddha and Bodhisattva images have been hauled off to different museums all over the word. Many Indian museums have displays of Buddhist images with the find spot being the Prachi valley. The images range from miniature sizes of four inches to the seven feet high image of Siddhartha with headgear that is kept in a shed at Kuruma Buddhist site. The excavated Buddhist Monastery at Kuruma near Konark is one of the few seaside monasteries ever discovered. The numerous Hindu temples where both the Jain and Buddha images have found place, given Hindu names are being worshipped as gods of the Hindu pantheon. Many of the temples have their origins from these Stupas including the Angeswara at Pitapada. The Sobhaneswara Temple and the Malikesh Shiba temples are examples of Jain centers which were converted into Shaivite ones.

Strangely some brick/terracotta temples are still there in Prachi. The scarcity of stone quarries in the alluvial plains of the Prachi valley was met by bricks. The monuments of the later period used stone blocks, which must have been transported over long distances. The many river bodies, along with the dug channels, which were aptly named pathara buha (stone carrying) or pathara bhasa (stone floating), denoted that the stone blocks were floated down to the sites. Out of the four varieties of the Kalingan style, three categories i.e. the Rekha, Pidha and Khakara are found in the valley from triratha to saptarathas. All the four – Deula, Jagamohana, Bhogomandapa and the Natamandapa are sighted in Prachi which speaks of the evolution of Kalingan temple architecture of Odisha. The abundance of blends of different cultures, religions and cults that are found in this small stretch is unique. Nowhere in India, or the world over, is such a profusion of splendid heritage, arranged in a chronological record found in so small an area

Believed to be one of the oldest and most sacred rivers of Odisha, Prachi today is just a small distributary of the Mahanadi. The source of this ancient river can be traced to Daka-amba near Naraj barrage. It flowed through the coastal region of the undivided Puri district before it emptied in the Bay of Bengal by way of two bifurcations, one at Keutajanga at Astaranga and the other near Konark. The present source of the River is Bakreswar Temple near Bhinjarpur, the stretch of 58kms which falls into sea at Astaranga. Even the present day Kanjia Lake in Nandan Kanan was an ancient backwater of the Prachi. Recently in 2018, the Archaeological Survey of India (ASI) had carried excavation at Bharatihuda & Jallarpur near Niali and unearthed valuable evidence of a civilization that was 3500 years old, which if established would be far older than the Indus Valley Civilization. INTACH has recently carried out documentation of the Prachi river valley whose report has been submitted with state Govt. Start-ups like Aitiha have taken initiative to organize curated tours of various magnificent yet lesser known sites under Prachi Valley.

As one of the oldest civilizations of the world, the monuments of the Prachi Valley have survived the ravages of time, vandalism and neglect. The Prachi Valley’s contribution for shaping the history of ancient Kalinga is insurmountable. All the assimilated religions & its monuments here have left their mark. The Prachi river touches 940 revenue villages in the three districts of Khurda, Puri and Cuttack. The river’s link with the Mahanadi and its navigable channel to the sea made it a centre for inward and outward maritime trade which needs to be further researched & documented.  The Prachi river is almost dead now, barring a few months, it remain almost dry throughout the year. Heavy silting, illegal sand mining, encroachment for farming and habitation, cutting off the river for roads and embankments and natural geo-morphological factors have contributed to the demise of this once revered river.  Its irony that such a epitome of culture & civilization is in sheer neglect, may be due to its geographic location in a backward state called Odisha. Things would have been different had it be in any northern or western states. Even in Odisha, less emphasis has been given, the veil which needs to be taken off, hence, its rightly said – Prachi Valley – Odisha’s best kept secret !

The Prachi Valley by Anil Dhir for INTACH