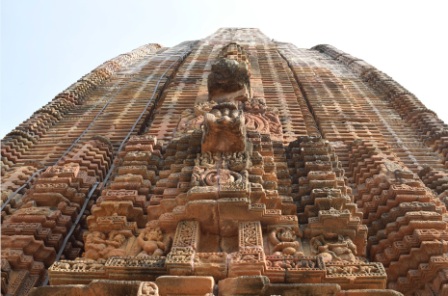 Buddhanatha Temple was built around 12th century by King Chodagangadeva of Eastern Ganga Dynasty. It’s a two chambered temple with rekha deula (sanctum sanctorum) & pidha jagamohana (assembly hall). There’s one elongated platform added later on near the entry gate which seems like a natya madapa (dancing hall). The temple has a saptaratha plan & is built on the ground level. Buddhanatha Temple, situated just about 22 km from Bhubaneswar, at Garedi Panchana village near Balipatna market, is almost unknown to the outside world, despite its big tourism potential. Let’s be aware that Buddhanatha is part of the majestic Prachi Valley monuments which are awe-inspiring.

Buddhanatha is an east facing living temple with presiding deity is an almost non visible patalphuta Shiba Linga worshipped as Buddhanatha Mahadeba with a circular shaktipitha of chrolite. There’s one mini platform noticed near the Shiba Linga with metal idol of Buddhnanatha worshipped on a khatuli type seat. The exterior walls of temple is decorated with architectural motifs such as – bajramundi niches in the tala and uparajangha of both the bimana and jagamohana enshrining dikpalas, mithuna, maithuna, alashakanyas in different posture. Surya, Mahisasuramardini Durga, Bajramundi pilasters flanking the parswadebata niches, miniature rekhamundis at the base of the gandi, decorative motifs like scroll work, beaded border, lattice design, chaitya medallion, , gaja- bidala, jagrata motifs, nara-bidala, kirtimukha, dwarf figure etc & birds like duck panel, elephant procession etc are worth watching personally. Inside the Jagamohana, images like eight armed Marichi, four armed Bishnu, five matrikas of a broken panel – Brahmani, Sibani, Kaumari, Barahi and Baisnabi and an unidentified female deity are found. Sandstone were used for the construction of the temple whereas laterite is used for the two platforms and the eastern side of the compound wall.

The temple is said to be based on tantric principles. Interestingly, ‘Garedi’ in Odia means hypnotism and ‘Panchana’ means the stick wand used by tantric practitioners. The name of the village – Garedi Panchana, also seems to have links to the claim. The temple architecture and construction is based on Garedi Yantra and it was a well-known centre for tantric studies in the Prachi valley. It is known that after the 7th century, due to tantric effects on Buddhism, the followers of the religion were influenced by the tantric cult. Some erotic sculptures, although mostly eroded, have also been noticed on the walls, maybe linked with tantrism. Research is on to prove the link between the name of the temple – Buddhanatha & Buddhism.

Sri Chandrasekhar Panda, the chief priest of the temple speaks proudly about the history of the south facing temple especially that of the 12th century smaller temple on the compound, named after Amrutalochani Devi, seated in padmasana on a double petalled lotus pedestal . It’s the village deity of Garedi Panchana. Believed to be of tantric origin, the female deity inside the Amrutalochani temple has three heads with six eyes. Debi, Shakti, Gayatri – are all worshipped in this small temple which are the various names of Debi Parbati. The pidha deula is built of sandstone in ashlor dry masonry & the most auspicious occasion is the Durgastami day for blessing seekers. During the zamindari system, the temple’s administration passed on to the family of Bhingarpur Choudhury, the local village zamindar residing at Bhringapur. The main rituals performed at the Buddhanatha temple which draws huge pilgrims from nearby villages includes Mahashivaratri Jagara, Dola Purnima, Sabitri Osha, Badaosha & other festivals related with Lord Shiva & Parbati.

The architectural features and sculptural details on the outer walls of the deula and jagamohana makes this temple unique in Kalinga architecture. Sadly, the temple is in dilapidated condition due less care & to its proximity to sea coast. The original height of the sikhara was 70ft. The main sikhara has collapsed from a height of 42 ft which has been rebuilt by State Archaeology. The Jagamohana gandi (trunk) has also collapsed on the north side. The broken statues and other artefacts including Mandiracharini, Udyotasimha, Mahaisasuramardini Durga, Kartikeya, Bhairava, Astikajaratkaru, Makara Torana etc that have fallen off the temple building placed on a “mandap” because there is no facility nearby to display them in a museum or gallery. The carvings on the temple walls are seriously affected by salty winds and some have been corroded beyond recognition. Statues of Durga, Ganesh & Kartika can however be recognized from the wall & there’s one particular statue which resembles Buddha. The huge Prakara wall around the temple compound which had partially collapsed, has now been restored. There’s also a beautiful ancient temple tank just outside the temple compound named Chandana Pokhari where Shri Jagannatha tele-serial was shot partly as said by locals.

The Odisha State Archaeology department has declared the temple as a protected monument & has initiated steps for the temple’s restoration. The first restoration job was initiated in 1970s & it was only in 2003 that the complete restoration of sikhara and jagamohana was initiated. The temple looks quite beautiful now after restoration. There’s plan to collect the scattered artefacts and ancient statues from the compound and store them properly inside a small museum at the temple. Buddhanatha Temple is a must for heritage monument seekers & being situated in a rural village amidst coconut trees adding beauty and serenity to the rustic location.

2 Comments on “A Masterpiece of Art Called Buddhanatha”