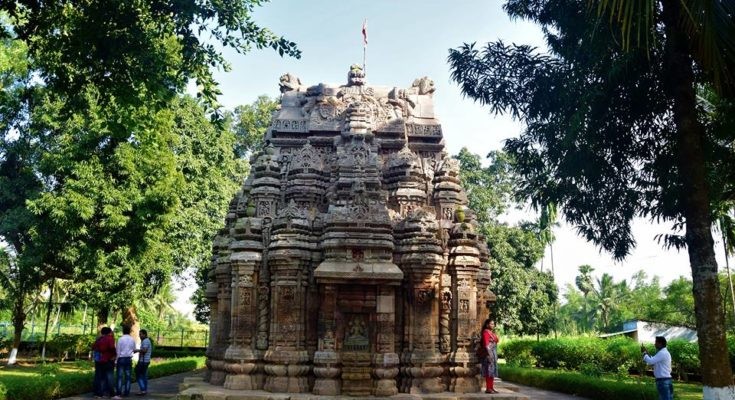 In our urge to visit the magnificent monuments & popular places of interest, we often miss out the finer creations close by.  One such monument is the pride of Prachi – Varahi, at Chaurasi village, near Amareswar in Nimapara-Kakaptur route of Puri which is  around 45 kms from Bhubaneswar. She is the female consort of Vishnu avatar – Varaha. The architecture has a khakhara style influence (vimana) which means the presiding deities are always goddess Shakti in various forms instead of gods. Architecturally, the temple which is on the right bank of sacred Prachi river, is the most beautiful monuments in the whole Prachi river valley.

Spread across an area of 2 acres, the pancharatha shrine & its lush green garden is well maintained by the Archeological Dept. The 27 ft temple, built in sandstone in 10th cent during Somavamsi rule, is a best example of showcasing exemplary sculpture under comntemporary Kalingan architecture. The chief idol Varahi is astonishingly beautiful & said to be the among the best found in whole India to which even disciples from far off Nepal makes visit. The intricately carved sculptures are a blend of Vaishnavism & Tantrism. Among the parswadevtas, the most attractive is lavishly made Sun God Surya i.e the God of Light who was worshipped as an important parswadevta at that time, on the west side of the east facing temple. The other noticeable parswadevta  is the Ganesha on the southern side.

The front entrance hall i.e Jagamohana is rectangular in shape with a two-tier flat rooftop resembling the Parasurameswar’ s hall of BBSR. The border works on the walls are noteworthy esp the depiction of Ramayana inspired from Jayadeva’s lesser known Rama-Geeta Govinda. Noted historian on Prachi valley, Sri Hansanath Sahoo says that Varahi temple is the finest example of Jayadeva inspired architecture which itself confirms the presence of Jayadeva in this sacred Prachi Valley (Kenduvilwa village).  Apart from the usual Gaja-Vidala, nagakanyas,  salabanjikas , there are also some erotic reliefs noticed on the walls which confirms that this was an earlier shakti or tantric peeth.

Shakti is the concept or personification of divine feminine power created from male gods as consorts bearing female names similar to their male gods. Here Varahi is the most worshiped goddess among the saptamatrukas, seven divine goddesses created from seven major Hindu gods with Varahi at 5th position. others being Brahmani, Vaisnavi, Maheswari, Indrani, Kumari & Chamunda. There are five forms of Varahi – Bajra Varahi, Chanda Varahi, Maha Varahi, Chakra Varahi & Matshya Varahi. Although, Chamundas, Saptamatrikas & even Varahi as parswadevis in temples are common, an independent shrine dedicated to Varahi is quite rare. Here, the deity is in black granite stone image if 5.9 ft height holds a bowl in one hand & fish in the other. She’s offered fish & wine as daily ritual which is quite rare in any temple, hence Matshya Varahi. The popular festivals related with Varahi includes Dussehra (shola puja) & other pujas related to devis. So, if you are an avid traveler, love heritage & monuments or simply into photography , then this temple is a must in your bucket list !

Howe to go : BBSR>> Nimapara-Kakatpur route>>Amareswar chowk>>take left to Chaurasi>> Varahi temple. Since, there’s no puja shop at the temple or nearby, tourists are advised to carry their own prasads. One security guard from ASI is manned to help pilgrims & opens the door of the temple for darshan. There’s no signage on the main road & the village roads to Varahi temple are narrow, hence mid size four wheeler is advisable.